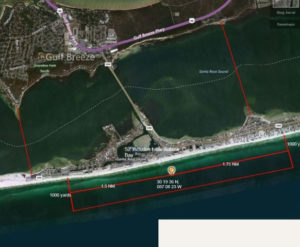 The Coast Guard schedules to establish two temporary safety zones in the Gulf of Mexico and the Santa Rosa Sound during the Annual Pensacola Beach Air Show at Pensacola Beach, Florida, July 7 and 8 from 7 a.m. until 4 p.m July 6, 2017. Uncooperative boaters will be expelled from the zone, cited for failure to comply or both. (Coast Guard imagery courtesy of Coast Guard Sector Mobile)